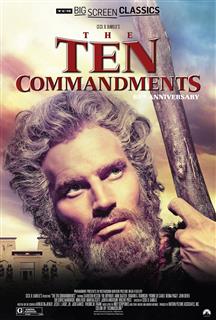 Throughout film history, Hollywood has produced a number of sweeping epics and generation-defining movies. However, one Biblical saga – Cecil B. DeMille’s The Ten Commandments – has withstood the test of time. The 1956 film is universally acknowledged among critics as a cinematic masterpiece with a legendary cast including Charlton Heston, Yul Brynner, and Ann Baxter. From its Academy Award®-winning director and revolutionary Oscar®-winning special effects to its sweeping score and unforgettable sets, The Ten Commandments presents the inspiring story of Moses in all its stunning glory. See this epic film the way it was meant to be seen – on the big screen! This 65th anniversary event includes exclusive insights from Turner Classic Movies.