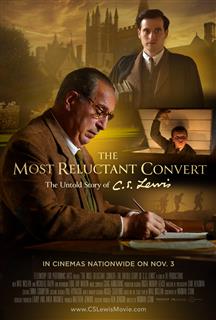 The Most Reluctant Convert: The Untold Story of C. S. Lewis, a new film tracing the spiritual journey of renowned author of The Chronicles of Narnia. Directed by double Emmy and double BAFTA Award-winning filmmaker Norman Stone (BBC’s Shadowlands, The Narnia Code), the biopic stars acclaimed theatre actor Max McLean as a middle-aged Lewis looking back on the events that moved him from vigorous debunker of Christianity to become the most influential Christian writer of the past century. The Most Reluctant Convert explores the impact friends such as J.R.R. Tolkien (played by Tom Glenister, Doc Martin, Vera), Hugo Dyson (played by David Shields, The Crown, Doctor Who) and Owen Barfield (played by Hubert Barton, Jekyll & Hyde, Deep Blue Sea) had on the dedicated atheist who was forced to question his own disbelief. The Most Reluctant Convert is a ringside seat as one of 20th century’s great thinkers battles with himself and ultimately finds faith.